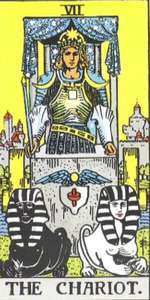 The Chariot in Love and Relationships tarot card represents aggressive Roman solider who is moving ahead with his broken chariot in the forward direction.

It primarily emphasize on the winning and also the things that are done in a hurry without much thought.

When this card appears in love and relationship situations, it can prove to be either positive or negative. This highly depends upon how one takes the action.

The upright Chariot tarot card talks more about the coming situations in your life, however it might not come as a completely known thing. It may bring you some unexpected shock in your life.

The Chariot tarot card can often mean moving forward in a relationship, regardless of how the situation is bad.

The readers know that the Chariot card can be interpreted in many unique ways, which can sound confusing to some.

To help you better understand this card, here are some of the situations that are compatible interpretations of the card.

This card indicates that the couples do not click instantly. However, they still might to work on their relationship.

The Chariot signals in doing things that are without thinking and the couple rely on their individual willpower.

This card can also indicate that the couple has undergone a bitter breakup and they don’t even wish to face each other.

Here the Chariot will take them in the opposite directions. The couple is using all their willpower to move forward from their breakup.

There are also chances that one of the partners will cool down eventually and will make an attempt to re-kindle their love after some time. The other person is quite angry and might not be welcoming to the contact attempt.

If the Chariot represents him in the next reading, then there are some things to worry about. He might not say anything offensive to her, but things can get uncomfortable.

The Chariot card actually says very little about the true romance and the connection can have military contacts. This card primarily connects with blind willpower, loyalty, and even offense.

In reverse, the Chariot tarot card implies the numbness of the person and indicates that the relationship is not going anywhere.