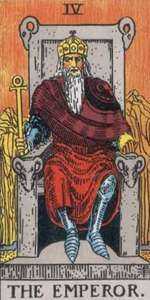 The Emperor tarot card represents a man who is ruling your life in most positive ways.

The readers often interprets this as the head of the house, which is why it is also called father figure or someone who loves to lay down the rules.

When the Emperor tarot card shows up in a relationship reading, it can mean many complicated things. There is nothing to worry about when this card shows up, as the arrival of the card is a good sign.

It is because the card emphasizes the word “here,” which means that the male partner is not going to go anywhere. This card shows that the lover is supportive and highly caring towards the partner.

The question here arises, whether your date will turn out to be a successful relationship, which highly depends on your love interest decision and not yours entirely.

When it comes to relationship and The Emperor tarot card, it may indicate that you are dealing with conspiracy and plotting in your relationship.

The person is likely to be an older man, someone who is from the armed forces, influential, bold, hot headed, and scary in eyes of many people.

When the Emperor tarot card appears in reverse, it implies the partner is irresponsible in the relationship. He is also the type of man who stays on one day and disappears the next day, and then again shows up after sometime.

He may also have the tendency to initiate trouble every now and then.

The relationship in these situations can become on and off. In short, a reversed Emperor means a chaotic time for your relationship.