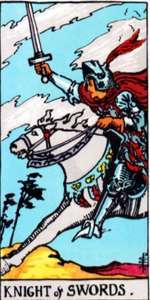 Knight of Swords in love indicates there is boldness in the air. It signifies the importance of speeding things up in a relationship.

It typically indicates a knight going on his quest with a magnificent sword in his hand.

In a relationship, it refers to two lovers who are motivated and don’t fear any danger.

They have the right combination of willpower and love in their hearts, which is depicted as a successful undertaking.

Knights are traditionally fighters, which indicates that the male in the relationship is on a verge of fight.

It can represent that the couple is going through some hard times. Here both want to prove that their respective point is right, which can cause further tension.

Knight of Swords have two meaning: If your love interested hasn’t noticed you, he is probably not interested.

If he has shown some interest in you one way or another, then he does have some romantic thoughts about you.

As this card suggests strong viewpoints, he admires you but he is ready to move on to the next.

In total reverse, Knight of Swords represents total waste of power. The lovers can find themselves at risk and cannot decide how to move forward.

A reverse Knight of Swords is a bad news and your love interest is not interested in you in any way. You should avoid contacting this man for a few days and if you really like him, wait.

The element air might sway his interests and he may change his thoughts about you.