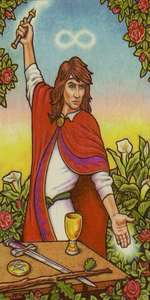 The Magician in Love tarot card is pointing out what is up in the sky is also below on this planet. It represents having the power to make things possible with determination and love.

The traditional meaning of this card is linked to the mastery of skills, as the magician has all the right tools displayed in front of him.

The universe that is depicted by the infinity symbol that is designed on the top of his head also blesses him.

On the realistic side, the Magician knows exactly what to do and how to do it right within the given time limit. When this card is used in a love and relationship situation, it is proven to be an excellent and fruitful.

The Magician tarot card when held upright basically talks about a lover who wants to be good to his partner. He is also highly serious by his nature and is capable to being a good boyfriend or husband. In simpler words, the Magician portrays a man who always has a good intention in his heart.

When this card comes in relationship, it represents stress-free environment and the love between the two people is spectacular and magical. This is the only fact that the universe blesses the relationship.

If you are constantly having arguments with your partner, then in this reading of the Magician tarot card, it may appear like the partners will get past the sour feeling and talk positively with each other.

The Magician influences the planet Mercury that governs the communication system. The two can have a polite conversation to bury the hatchet.

In reverse, the Magician tarot card depicts an actor in the male presence of the relationship. He has a hidden mission to get something that he wants from his lover.

The man is self-centered and also experienced in exploiting women to get what he wants. He does not realize that the thing he is doing is making him look like a villain.