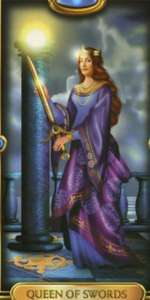 The Queen of Swords Love represents an acute feminine energy surroundings your aura.

It is all about the mind and logic. When it comes to relationship situations, it does not represent anything romantic.

Its appearance entails a girlfriend’s position in her boyfriend’s life. If this card appears in a man’s reading, then it may hint a woman governs his mind and heart.

The tarot card focuses on the idea that the girlfriend is always with her boyfriend – in tough and easy times. It can give a feeling of love and can be shown as a signal if someone is thinking about you.

In general, Queen of Swords doesn’t provide a good sign when it comes to tarot relationship readings.

The queen is considered to have taken out her sword and is ready to rule. It represents something amiss in her surroundings, which indicates that the girlfriend or wife may cause some troubles in the relationship in the future.

It is not always dangerous, but can lead to some long-lasting troubles in the relationship.

It can also appear in a man’s reading that have a commitment phobia. The card implies loneliness and depression under such circumstances.

When Queen of Swords is reversed, it can become nasty and even more disrupting. The girlfriend can make the boyfriend feel really unwanted, as he has given her the impression of untrustworthiness.

It simply implies that the compromise between the lovers has reached a no point of return.