For a rapid answer to your problem, querent simply draws one card. Just a single card is enough to give an overall impression of your question you are running through.

Three Card spread gives a quick and accurate answer to the quenter’s single question or issue. To start with, lay down three cards in a row from left to right.

If you need a general overview of what’s going in your life, use the Horseshoe spread.

Every card in Spanish Tarot Deck has a different meaning. If you want to master it, you need to understand the meaning and significance of these cards.

The Spanish Tarot Cards are now used for both purposes: playing games and fortune telling

You can choose your cards. Select your 3 cards.

The deck of Spanish cards known as the Baraja Espanola consists of 48 cards that are divided into 4 suits (Palos).

The suits are Cups/Hearts (Copas), Coins/Diamonds (Oros), Clubs (Bastos), and Swords/Spades (Espadas) and are mostly used for games and fortune telling purposes.

If you require a quick answer to your question, draw one card, and it will give you an overall impression of your problem.

The method for drawing the Spanish Tarot Cards is suitable for finding how your day is going to go.

Drawing a club means that you have issues with your business, and a spades cards indicate that difficulties will be more important.

Out of the entire deck, the Spreads include more cards and give you a far more detailed reading. 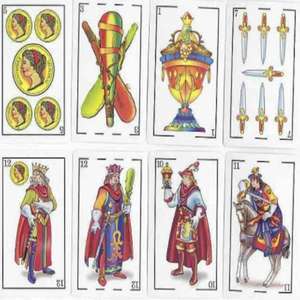 Three Card Spread: This spread will give you an overview of a single issue. Lay out the three cards from 1 to 3. one represents past, 2 represents present, and 3 represents future.

The Horseshoe Spread: This spread will give you a more general overview of your life by using 21 cards.

Lay down the seven groups of three cards in the shape of a horseshoe and each group will cover a category.

The Gypsy Spread: For the gypsy spread, lay three rows of seven cards.

This spread demands experience and should not be drawn until you are very confident.

The Meanings Of The spanish cards tarot