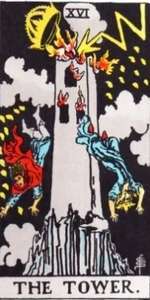 The Tower Card represents swift change that is taking place in your life. This card is dramatic in nature and it pictures a tall tower that is struck by the thunder of the sky, while people are falling down.

When this card appears in a love and relationship tarot reading, the Tower can mean a lot of different things.

The primary thing that one should know about the Tower of Card is explosion in the mind.

If the question asked is psychological in nature of the lover, then the appearance of the upright Tower tarot card tells about the quick change that is taking place in his or her mind.

All the past opinion that her or she made about you are slowly and slowly fading away, but at the same time new ones are forming.

The picture of the upright Tower in this tarot card also focuses on the disputes and dreams that are breaking into pieces and leading to a separation in the relationship.

However, it is important to think that the disputes are not a permanent thing in the relationship, and they will go away with time. The dream being broken in the picture can seem like a negative sign.

When such circumstances arise, one needs to have a strong state of mind and rebuilt their future with hope and happiness. As for the separation, it is also not a permanent thing.

The Tower tarot card portrays the gaps in the meeting days of the couple.

For example, if you see your girlfriend or boyfriend only on the weekends and the weekdays, they are busy with work, and then the Tower tarot card represents separation time.

In reverse, the Tower tarot card reveals to not be one of the best tarot cards.

The destruction of the tower and its people is still happening in the card, but the only difference is that is pace is going to get slow now.

The fire now burns underneath the tower, which means that the tower burning still continues, however it will take some time to complete.

The person is gathering their mind and heart with pain and it will eventually affect their life and relationship. If this card is continued to include in the love, the breakup will happen in a negative way.